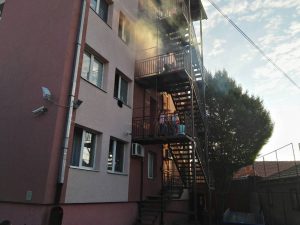 Timok Youth Center in partnership with the Department of Emergency Situations in Zajecar organized a lecture and a firefight evacuation exercise at the Students’ Home in Zajecar.

Enhancing cooperation with the representatives of the Emergency Situations Department and the Fire Brigades in Zaječar, the pupils of secondary schools and Students’ Home held a training course in which they were demonstrated how to properly evacuate at an unexpected and extraordinary event, what the evacuation plan looks like, etc. The next day, the whole exercise of the evacuation simulation from the Student Home building was carried out. After the announcement of the alarm siren, the students gathered and according to instructions evacuated the building. When all the students left the building safely using the fire staircase and reassembled at the designated place, the firefighting unit entered the Student Home building, which marked the end of the exercise. The pupils successfully mastered the exercise and came to the at the designated place in planned time. As the students themselves said, they will know how to react in the event of a fire, whether they find themselves in the student’s home or some other building, and how to safely extract others from their surroundings to the designated place.

The activities were implemented by TOC as part of the Click Green project. The aim of the project is to raise the capacities of the TOC and network of partners in Eastern Serbia to actively monitor the preparation, adoption and implementation of local and national environmental policies, as well as negotiation chapter 27, with particular reference to the two components from negotiation chapter 27 – Environmental protection, Horizontal Legislation and Civil Protection.

Our idea is to directly involve our fellow citizens during the project implementation. In cooperation with the representatives of the Emergency Situations Department in Zaječar, we aim to draw attention of our fellow citizens, starting with the youngest, to the importance of proper response in emergency situations so that they can protect themselves and their families from the consequences of emergencies.

In the previous period three regional meetings were held in Zajecar, Pozarevac and Pirot, two CSO trainings were organized for the members of the Click Green network from Eastern Serbia on the topics of policy writing and public advocacy, and two public activities were implemented in the occasion of Planet Earth Day in Zajecar and Pozarevac.

Timok Youth Center’s project Click Green is being implemented in partnership with the Umbrella Youth Organization of Serbia, Youth of JAZAS Pozarevac and Resource Center Bor, as part of the CSOnnect support program for human environment – CSOnnect, The Regional Center for Animal Health and the Swedish Agency for Development and Cooperation.